MyFlickr:
Get this widget at roytanck.com 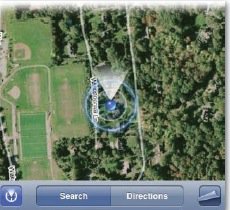 It’s great to see a blue pin on the map, and all—but how do you know which way you’re facing? Legions of iPhone fans have developed a peculiar ritual known as the iPhone Circle, in which they run the perimeter of an imaginary 50-yard circle, holding out the iPhone before them, in an attempt to figure out which way is up on the map.
If you have an iPhone 3GS, you don’t have to bother. Thanks to the built-in magnetometer (compass), the map can orient itself for you. Just tap the lower left button twice. The map spins so that the direction you’re facing
is upward. A “flashlight beam” emanates from your blue dot; its width indicates the iPhone’s degree of confidence. (The narrower the beam, the surer it is.)